In the midst of “Base 2” training block, I couldn’t afford tapering and missing my long ride on Saturday, so just like my previous Tahura races, I was up at 3:50am to ride Madonna (my Trek Madone nickname); “Aerobic Endurance” was on the menu, so I spun 195w (Zone 2) for 3h, followed by a quick Transition run to a big breakfast at 8ish, a recovery meal that doubled as my main "carbo-loader" for the race. I felt great in the ride, but thought the run wasn’t as fast as I wanted, or was probably too short to "hit the spot".

Courteously, Jawa Barat governor and his wife invited Running communities to a pre-race dinner at 6pm, I would’ve loved to join but it took longer to drive from Jakarta under a heavy rain, arrived to Bandung after 8pm, grabbed a grilled fish dinner with some Nasi putih to top up my glycogen stores on my way to a Hotel I had booked in upper Dago.

It rained for hours, I could still hear thunder blasting as I went to bed around 11pm; “Tomorrow is gonna be slippery, muddy and EPIC” I thought. So it was!

4:40am wake-up on race morning was a welcomed sleep-in compared to Saturday; I never deviate from what worked for me in previous races, including breakfast, so it was the ritual coffee, chocolate bread, milk, + Algerian dates and figs this time.

I prayed Subuh, hired an Ojek to Tahura, where my bib was waiting for me at the very helpful Panitia tent; did a dozen of accelerations to warm up then headed to the start line where I was welcomed by dozens of trail running friends mostly from Jakarta and Bandung. I love Tahura’s homely family atmosphere! Standing there as the previous year’s winner, defending a title among high caliber local and foreign competitors was supposed to put me under pressure, but there was none; Feeling part of Tahura’s warm family brought peace to my heart.


Margono (aka Ono, last year’s runner up) burst from the get-go, pulling a suicidal pace 4 on climbs, which made the first 3 km’s the relatively fastest of the entire race (3:47-3:52/km Gradient Adjusted Pace); I knew that wasn’t sustainable but my race strategy was to shadow him, “He lost to me by only 1min last year and must’ve come back with a vengeance” I thought, while watching his lean and light climber build eating up the early steep ascents like cookies, and later in the race, gracefully cruising in narrow and slippery technical tracks like a butterfly.

Right after the first WS at Kelurahan Ciburial (km2.5), a 500m wall-like climb faces you and gives you a first taste of Tahura’s lung-punching climbs, everything before that point is foreplay.

An even longer wall is thrown at you right after the 2nd WS at Dago Resort (km5), that’s where Ono tried to break and our chaser Ari attacked me and said “Semangat!” I “Semangat” him back, overtook him and spent the next 3 km’s in Hurt Zone 4, striving to not lose sight of Ono ahead and to fend off Ari behind; “Who runs a marathon at the intensity of Muscular Endurance intervals?” is a thought I had to fend off too; Our smart-ass minds often try to talk sense into us in races, things like: “You’re not built for climbs” and “Give us a break, we are in the red!” are the sort of blablabla I strive to ignore in races, and just stick to plan, and today’s was: “Not taking any risks and keeping competition in sight”; we hit the first treacherous and bushy tracks at this point, and I cut my right thumb while grasping plants on the side of the track, I sucked the blood and kept going.

I suddenly lost sight of Ono in the kampung roads after km8, and as I was pushing the pace to catch him he suddenly emerged from behind and told me he took a right turn instead of left, I looked back to see if any chasers were visible, there were none, “I shook Ari off” I thought; From that moment on until km26, Ono and I made a truce, “Sama tahun lalu” (Just like last year) we told each other, and ran together for the next 18 km’s taking turns in the front, calling marks to eachother’s attention, scaring dogs away, checking on each other whenever one of us slips and falls (I lost count of how many times that happened on the muddy and super slippery tracks), “Hati-hati” (Careful) we’d shout; in retrospect, our truce lasted much longer than last year! That said, whether I’m running with my rivals, chasing them or being chased by them, we never stop being Trail Brothers.

Never underestimate Tahura’s kampung alleys, km9 in those narrow Casbah-like alleys, is the steepest of the race (113m elevation gain); we’d climb up Bukit Bintang wall soon after, WS4 is mid-wall, a band was playing there, their drums celebrated our agony and lifted our spirits to brave the trails ahead, I looked back at the top of the climb, still no sign of competition.

Running in the pine forest is pleasant, 1520masl makes it the 2nd highest peak of the course, that altitude combined with the trees shade makes it cool as well; we hit a point where the trail split into two, Ono and I slowed down and agreed the FM course goes up (last year’s memories?!), “last night’s rain must have wiped out the marks” I told him; sticking together was an “Anti-nyasar insurance policy” (Nyasar in Bahasa means getting lost), or so we thought!


After a couple of Desa outside the forest, a marshal directed us right to a wider dirt road at Km14, which we ran at a swift pace until we couldn’t see any marks and doubts started kicking in, I asked a farmer if he saw any marshals or marks? He said he had just climbed up from the plantation down the road; “Gimana?! Should we keep going? or turn around?” our decision was the former, till our doubts grew enough to change our minds, and got finally dissipated when we saw a marshal on our way back: an arrow was there, we missed it; the marshal wasn't, he missed us; Now that I analyzed my GPS file, our “little detour” cost us 2.1km, over 12 minutes, and moved us from leaders with a cushion to 6th and 7th; “5 ahead” he said.

“Ari?” I reckoned. “Manolito Divina? The 2016 Asia Trail Master champ from the Philippines; Arief Wismoyono? 2015 ATM champ from Bandung.” Those were my best guesses; I didn’t know who the new leaders were, nor how far ahead! “I have a lot of chasing to do” I realized, “You still have plenty of trail (2 thirds of the course) to do it”, was the glimmer of hope that kept me going.

The next third is the most technical of the course; entirely in the forest, it features its highest peak (1527m), steepest and most treacherous descents (-151m in km22), bushiest and most slippery single tracks (they got bushier this year, the scars on my hands and knees still burn under the shower), longest water crossings and muddiest trails; its technicality (and last night’s rain) made it the least runnable third; Were I leading, I would’ve probably taken less risk here, but I was The Chase with ground to make up, so I gritted my teeth and held on for a rough ride, giving in more to gravity in descents, fighting it harder in ascents. We caught a runner before Kembatan Merah (WS5), then glimpsed 2 more in its uphill, “Catch them and you’d have only 2 left” but they didn’t let go without a fight, Chris Miller (who’d win the Master AG), then Arief (who’d finish 4th), “Jangan nyasar lagi” (don’t get lost again), he nicely told me as I passed him.


Endurance events are mentally exhausting, staying alert is key: alert to what our bodies tell us, to our technique, to the terrain, to rivals; Trail races are even more mind-engaging, every step is.
A single moment of heedlessness can sprain your ankle or send you flying down a cliff. The forest sucked my wit, and my lack of sleep in previous nights didn’t help; Glad I had caffeinated gels onboard to the rescue.

After being chased by a couple of stubborn dogs on a muddy km28, and having to scare them away with pine cones more than twice, the sight of WS7 at Cikawari was the most welcome! “You are second” they said; I thought there were still 2 ahead of me, something must’ve happened. “How far is he?” I asked the Bandung Explorer volunteer, “3min” he answered, “5min” he rectified. I poured water on my overheated body, grabbed 2 bottles, drank from one and carried the other under my left arm. “1 ahead, 5min deficit, is 12km enough?” couldn’t be answered; at least some uncertainty was gone and my chase became more tangible; but I wanted more data, I asked again 10min later, “Jauh, lumayan“ (quite far) the marshal answered, that’s when I decided to stop asking; “It’s not over until it’s over” is one of my mantras in long training sessions, it came handy that day.

The next 4km through Cikidang are the only flat section of the course: a couple of dozens of corners through fields and streets; I got to a T junction with no arrows and thought disaster hit again, I had just followed a right arrow 200m earlier, so I turned around and stopped to ask villagers, another runner showed up and after a quick chat we agreed the kids must’ve flipped the arrow’s direction, so he thoughtfully corrected it and we set on our way. Another 2min were lost!


After a quick intro (in french), Belgian Gaspard and I breathlessly agreed to chat after the race, and ran the next 3km through Langensari veggies farms together, I was so thirsty I was tempted to pick some tomato and quench my thirst. We hit the last 18% lung-puncher to enter Taman Hutan Raya; with only 5km left on slippery but familiar cobbles, I broke away and braced for a final stretch of hurt; this is where I took the lead from Ono last year; and funnily enough, I glimpsed Ari’s blue top ahead, he heard my panting and reacted, I pushed an unsustainable pace past him to create a gap, and hoped my lactate-loaded legs would follow and tolerate the pain to the finish line; seeing HM runners was motivating, “Permisi” I’d say before passing. “Go Doel!” many of them cheered. I’m especially grateful to one of them who shared his water bottle with me when I really needed fluids before the last WS at Bendungan Pdam (Km39).

Leading a race is euphoric; the endorphins our central nervous system generates act as an analgesic, a pain inhibitor that keeps us going; God engineered our bodies so marvelously we humans could never simulate it nor thank Him enough. Euphoria hormones is what I needed in the cruel last km of the race, where the trail goes up again 28m gain to the finish. I hugged a marshal past the line then did my ritual Sujud Syukur to thank the Almighty.

Wailan, Ina, Noval and many other friends rushed to congratulate me. My 4h02 was a course record, but just seconds faster than my winning time last year. I failed the sub-4 I was aiming for, but with 14min detours (12+2) and all the mud on the course I was happy with the time and the race outcome. Alhamdullillah! A sub-4 Tahura can wait till next year insyallah!
I’m thankful to all who made Tahura Trail race happen! A true celebration of the Trail! 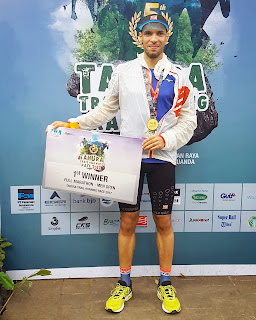 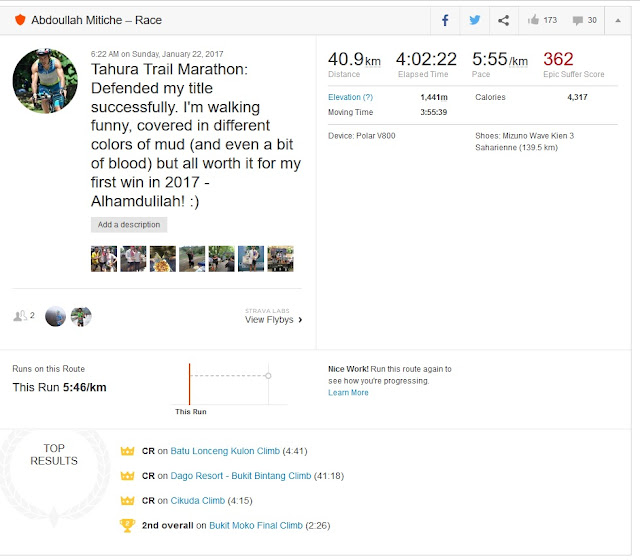 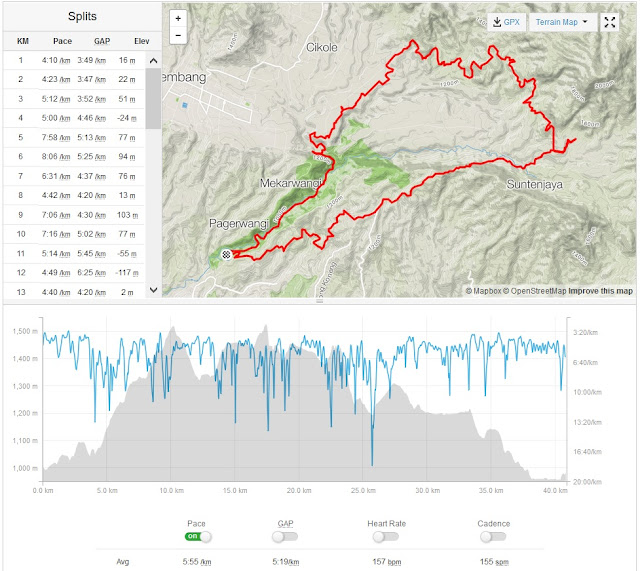 Posted by Abdoullah at 3:11 PM